I’m a creative guy with over 18 years of experience in Visual Design, UX-Product Design, Management and driving process in and around Creative-Product oriented Teams. I'm passionate about everything from psychology to typography… working in environments where I can be a strategic, collaborative member of digitally focused projects and products built for Users. I've had extensive experience working with both executive teams and stakeholders and partnering closely with Engineering, Product Management and Program Management to deliver the most usable, successful solutions that meet business needs.

Offering a brief glimpse into my history, you'll see I actually have my Masters in Interactive Design. I love evangelizing the importance of Human Factors ( HCI ), Usability, User Experience processes and especially the why behind how users are influenced throughout a system. With these passions and skillsets I've been afforded the opportunity to design applications (like Voice for example), websites, products and experiences for clients such as Gatorade, Mtn Dew, Chiquita, Levelor, 3M, and many more.

I have deep experience both within various Ad Agency environments and with building and leading teams of Product Designers. I enjoy building Apps and Enterprise Solutions and performing Usability Studies. I can illustrate. Present. Inspire. Mentor ( constructively ). Persuade. 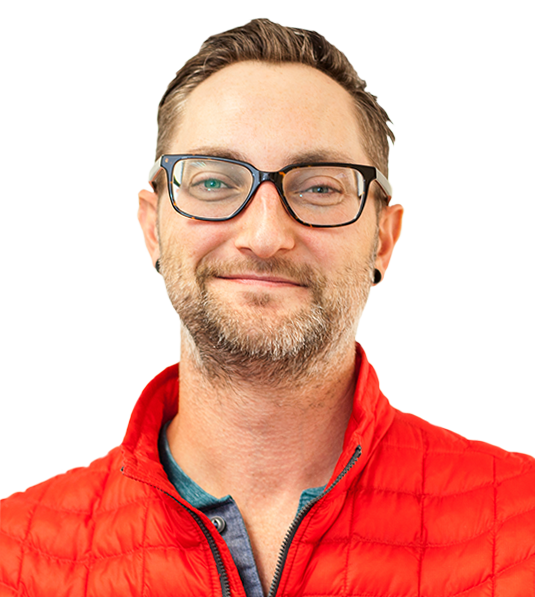 Beginning as one of the early members of the Block.one, I worked with the UX Director to build and grow a robust design team. One of my major passions is being a mentor and building teams of collaborative, intelligent, multidisciplined individuals that can deliver together in amazing ways. We focused on learning from and informing each other constructively. I managed daily activities and resources, ensuring on time delivery at expected quality. My focus and priority as a leader and manager was to keep communication fluid, unblock my team and support them with delivering their best. Together, my team and I performed user and usability testing regularly to collect data and inform our products. With research at hand I interacted heavily and collaboratively with both Engineering, Product Management and Program Management teams to define, design and develop products while continuously refining our own processes and relationships. I lead design and UX on multiple Block.one initiatives, including Voice - a social media platform built on Blockchain tech. With the Voice product, I contributed to growing it from infancy and concept to a launched, social media application being used by an ever growing audience of real users. During my time at Block.one I evangelized for data-driven design, for Design to be leading factor in Product development, and advocated for design systems and coded components to raise our bar of efficiency. As a cultural leader at Block.one, I also substantiated a weekly, company teaching lunch session where employees were encouraged to share and learn from each other. I also introduced mechanisms within our culture to recognize others for their efforts and hard work in an internally facing format.

A career-long passion of mine has been serving as a mentor and constructive Sherpa to others in the design field. As an outcome of receiving my Masters years ago, I have had the opportunity to teach several courses at Virginia Tech. As an adjunct faculty of the School of the Visual Arts, I've taught both Design-focused students the merits of UX and Digital Design and also introducing UX Design concepts to non-design students from other curriculums.

Here I lead a team of Product Designers for almost 2 years as the UX and Creative Director. I worked side by side with App Developers and Front End Developers, informing and executing everything from strategy to UX to visual design on projects ranging from Native Applications to monstrous, complex enterprise solutions. During my time at Exadel, I pushed to envelope the Front End Team into the Creative Department, merging teams and processes that facilitated each other. I helped initiate processes that facilitated development and Creative relationships. I also worked with fledgling ideas from potential businesses - helping them flesh out their App concepts, building everything from Investor decks and materials to interactive demos. I also lead and conducted a major Usability study - driving both quantitative and qualitative research, interviewing users and performing prototyping exercises with them.

For almost two years, I worked at an ad agency in Denver called Motive. At Motive I served as the creative lead on all digital projects and also got involved in all mediums of advertising, with clients such as Gatorade, Pepsi, Mtn Dew, Van's Foods, Amp and many more. I ensured all digital and Interactive projects were addressed in proper UX and IA fashion, building prototypes, plotting architectures and User Journeys and implementing modern best practices in Product and Web design to ensure usability. Motive is heavy on the conceptual side, and I was constantly cranking out ideas. As with every former position, I've taken every opportunity to mentor and guide younger designers.

Before Motive, in Austin I worked for a shop called Proof Advertising. At Proof I was responsible for leading Digital and Interactive projects and campaigns for clients such as 3M, San Antonio CVB, Huawei and more. As Senior Interactive Art Director, I was not only involved from concept to completion of several projects, but I was also able to mentor and guide younger designers. Here I also oversaw proper UX, IA design and architectures, using Prototyping, Personas, User Testing and other proper UX Process means to ensure a good experience for the Users.

I had an interesting opportunity to work as a Creative Director for a startup in Blacksburg. Lujure was a small company offering a huge product - a do it yourself platform to build Facebook Fan pages. Working closely with the CEO and actual customers, I evolved the visual brand identity and voice into a modern, social feeling company - Heyo. As Creative Director my responsibilities also included building out the Creative Team - seeking, interviewing and hiring, candidates.

Before relocating to Austin, I formed my digital roots in the cozy corner of Southwest Virginia. Among several positions within the company and obtaining my Masters Degree, I spent a good amount of time working at a digital agency called Modea. During my time at Modea I filled several roles. I began as a mentor and trainer to younger designers, helping them with their knowledge and efficiencies in workflow and software. I also served in a management position where I oversaw a small team of designers while continuing to mentor their design and workflow habits and finally gravitated towards an Interactive UX Designer role. Within this role I worked on numerous projects spanning from website design and architecture to video spots and shorts. During my time at Modea, I served frequently as both UX Designer and Art Director, overseeing projects from start to finish. Beyond these roles I always worked as a collaborator and team player, ensuring the best quality of the project at hand.

After learning a wealth of proper UX and IA process on the job, I decided to head back to school and obtain my Masters - formalizing my skillset in Interactive Design and Human Factors. I chose Savannah College of Art and Design and worked through the program while still working full time.

Virginia Tech's design program was super competitive. After deciding Graphic Design was my future, I went up against hundreds of other students, earning my spot amongst 50 new students into the School of Visual Arts. I graduated with a Bachelors of Fine Arts, concentrating in Graphic Design and Multimedia.

Art brought me into the world of design, so it still manages to occupy a good amount of my non-design time. I love painting, drawing sketching and ceramics. I do have a fondness for Art History and would happily discuss what is Art over a beer any time. Aside from that, my wife and I hike, see as much live music as possible and travel whenever we can. I am absolutely still and will always be a nerd as well - geeking out over sci-fi, super hero movies and outer space.

Clients I've had the fortune of working with